The Integrity Measure – why education needs it. 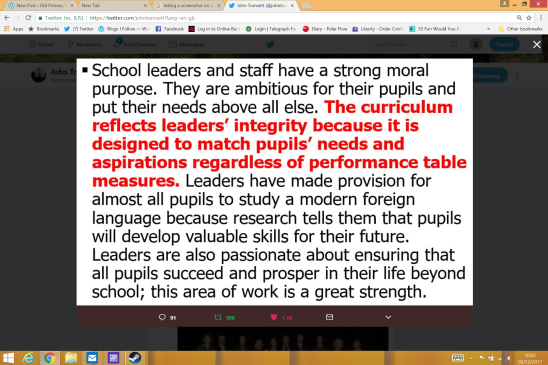 Three Year Ones tentatively appeared outside my office yesterday, (two boys and a girl). They had navigated the many corridors and stairs from the far reaches of the ‘other side’ of our large building to get to the Head Master’s room.

I smiled and asked, “Why are you here?”

“And your teacher has sent you to me to get some BIG gold coins I expect?” I watched his face light up at the mention of Gold Coins (These are house points which the children hand over during assemblies or weekly House Meetings – Gold Coins are worth a LOT of house points and they matter in the grand battle for the yearly House Trophy.).

I begin to hand out three gold coins but the girl stops me and says, “Oh, not me, I was just taking them to your office…” Her honesty hit me like sunshine on a cold day. It often takes a child to remind you of our core values – even after 16 years of headship.

I wish there was more integrity in education. If there was then I feel more school leaders would follow their moral purpose and do what is right for their school community rather than what they perceive outside agencies, such as the DFE and Ofsted want of them.  Seeing the tweet by @johntomsett at the start of this blog was a light-bulb moment this week. Though I have never met John I heard him talk a few years ago. He is clearly a school leader who is getting on with the job (sometimes publicly) and if anyone ever wants an outstanding grade (think carefully) then it has to be on these terms… I quote John because as much as I agree that this statement feels like a game changer for many of us.  It was something else he said that resonated with me this week.

This is the leadership I want to hear when I switch on to social media… Leadership that resonates with me and with my profession. Leadership that is tuned in to the realities of running a school but has not lost sight of its purpose. I don’t want to read far right tweets from world leaders or Nick Gibb telling us about the ‘teacher-led’ revolution in to buying text books at a Policy Exchange book launch. I want to be inspired by people who understand what we are trying to do and better still are finding ways to do it… and most importantly – they are doing it with integrity, with moral purpose and a clarity of vision.

This is also Ofsted at its best. I imagine when Mr Harford reads reports like this he feels warm inside… because I know he knows (even if he is, understandably,  a little defensive over it) that what Ofsted says matters. It will send a message out there to others (Though I imagine there are other schools with similar reports – this high profile one does matter because it will get much coverage). A message I have heard him say many times… Don’t do it for Ofsted. I wound say this… I’d just say, “Do it for your community”. If I am ever measured on anything (In 7 years time) I would like it to be on that.

2 thoughts on “The Integrity Measure – why education needs it.”